The Day The Music Died: Reflections on a Long Day's Journey into Copyright 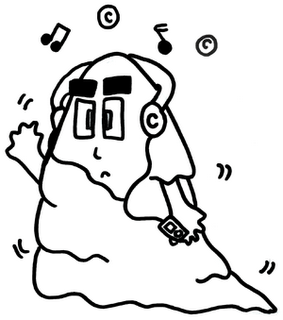 When the exposure draft of the Copyright Amendment Bill was released a little over two-and-a-half months ago, I have to admit I was blinded by love: I was just so happy that the Federal Government was going to make it legal to tape shows off the TV for later viewing and copy music onto my beloved iPod. Like any girl, I was willing to look past any flaws because of what I believed were gems in front of me.

All this time later, and what a fight it's been. The amendments were passed by the House of Representatives on Friday, Attorney General Mr. Philip "tougher on pirates, fairer on consumers" Ruddock (as I've heard him say here, here, here, and just two days ago here) has done an FAQ, and the Bill should receive Royal Assent on January 1 2007. Who could have predicted the many problems that came out of this Bill? It seemed that with each day, and with each view of Weatherall's Law, the problems just kept getting bigger and uglier.

At first, it seemed like the technological protection measures were the biggest nasty in the Bill. But then we all started to have a look at the new enforcement provisions, and that's when the penny dropped. Strict liability offences? For copyright law? That was pretty much when many of us – including Australia's "pesky academics" as the Australian Financial Review described them (tongue in cheek); industry organisations like the Internet Industry Association, Google, and Apple Australia; consumers and associated organisations like CHOICE; and, oh, voters - went into overdrive.

"This Bill is bad!" we cried. Free Mickey? That's so five years ago! Free the iPod! Free consumers! I could see the criminal poster: "Wanted for copyright crimes: CD Burner. Last seen producing illegal copies of Billy Joel's Piano Man." Well, the Government, to their credit, listened, and removed a number of the strict liability provisions.

And, admittedly, the Bill is not all bad. In addition to the time-shifting and format-shifting provisions, the Government also introduced another fair dealing exception, this time for satire and parody. A number of educational reforms were also introduced, so that educators won’t be financially charged for caching online materials used for educational purposes. The Government also clarified a number of changes made under the Copyright Amendment (Digital Agenda) Act 2000.

Just one final note though, perhaps Senator Andrew Bartlett deserves the last word on this Bill, for his acute ability to see the truth. As he said in the Senate Debates on the Bill, the Government took a bunch of different issues and put them together as "one congealed wobbling blob." (see the Senate Hansard, 30 November, p. 102) Here's to you, congealed wobbling blob of copyright.

(Pictured: "Congealed Wobbling Blob of Copyright", Abi Paramaguru, Picture is available under either a AEShareNet

> The Day The Music Died: Reflections on a Long Day's Journey into Copyright (permalink)