The War of the Blobs

Could this be the case of the Congealed Wobbling Blob of Copyright versus the Andrew the blue blob? Steve Baker, winner of Tropfest (an Australian short film festival), is under scrutiny because of the similarity between his winning entry ("An Imaginary Life") and an American TV series ("Foster's Home for Imaginary Friends").

The characters in both are blue blobs (one called 'Bloo' and the other 'Andrew') and they are both abandoned imaginary friends living among other imaginary friends. The copyright owner of "Foster's Home for Imaginary Friends" is apparently "looking into the matter". Baker claims that he has not seen this American TV series before.

More information is available at Now the Blob is Back and Tropfest and TV Lawyers Scrutinise Tropfest Winner. I haven't seen the American cartoon in question but an article in today's Sydney Morning Herald raises a fine point:

"As the saying goes, good artists steal, bad artists plagiarise. Very few works are original. A writer is influenced by previous writers and in some instances improves on the seminal work." (Lawyers Stir the Murky Depths of Plagiarism)

(Pictured: "Blue Congealed Wobbling Blob of Copyright", Abi Paramaguru, Picture is available under either a AEShareNet

Some readers may be familiar with the M/C Journal, an online peer-reviewed media and culture journal where each edition centres around a common theme but there is incredible variety in the article choices. Past editions include Copy, Collaborate and Free.

The December 2006 edition is definitely worth a look - titled Jam, the articles range from pieces on code jamming and mash-ups to analyses of making actual jam. Given that one of the benefits of the commons is the ability to take something old to make something new, the articles on jamming are certainly worth a read.

For any readers who may be interested to contributing to this journal in the future, upcoming edition themes include Mobile, Error and Vote. Find more about how to submit here.

We know that many readers visit the House of Commons seeking answers to important questions. You might come here seeking to find out, "What does copyright mean for me?" Or, you might be asking a question that we've heard many times in the past few months, "What on earth can I do now that the Copyright Amendment Act's been passed?"

Well, we can't answer all these questions, but we can point you in right direction for the last one. The February 2007 edition of the Federal Attorney General's Department eNews on Copyright is a good place to start. From there, two other places to visit are the Copyright Amendment Act page on the Attorney General's Department website and the fact sheets that the AG's has produced on the various new amendments.

I've been away from the House of Commons for a while, but it's good to be back with my housemates Ben and Abi. It's also been good to come back and have a read of some of the new literature that's been emerging about the issues we discuss on this blog. I just wanted to highlight two papers that are worth a read and are accessible via the Australian Copyright Council's website. Both are by Ian McDonald, a Senior Legal Officer at the Copyright Council, and can be found either here or in the Copyright Reporter.

The first is "Some Thoughts on Orphan Works", an issue that's been discussed on our blog quite a lot in the past. McDonald gives a very comprehensive overview of what's been going on to address the orphan works issue both in Australia and overseas. This article also appears in the October 2006 issue of the Copyright Reporter. (Yes, I know there's a lapse between the release of this article and my blogging about it, but everything from about September last year passed by in a blur due to the Copyright Amendment Act!)

The second is titled "Creative Commons: Just Say 'CC'?" In this article, McDonald covers some of the criticisms of the Creative Commons licensing regime that he's discussed in the past and have also been raised a few times by Niva Elkin-Koren and Kim Weatherall in similar papers. This article was in the December 2006 issue of the Copyright Reporter.

I'm really enjoying writing my thesis on the copyright commons but covering all the relevant literature certainly keeps me busy!

Save the Orphans!- Part II

The David Hicks of the Copyright World?

"Hew Griffiths has been in prison here for nearly three years for allegedly breaching US copyright law. He has been charged by a grand jury in the US, but the offences alleged against him have never been tested, and the Australian Government has refused to resist an American demand to 'surrender' him to face trial before the US District Court in Virginia.

There is no guarantee that the time he has served in prison will be credited against any US sentence, which could be for as long as 10 years.

What is particularly fascinating is that it is possible for Griffiths to be charged with these offences under the Australian Copyright Act.

Griffiths has instructed his solicitors that he would plead guilty to offences under our Copyright Act. He has probably already spent more time in prison than any person convicted of a copyright offence in Australia.

All the British were charged under British laws and the US did not push for extradition. Griffiths is the only person, and the only Australian, in the group that the US is pressing to extradite."

Read more in "Another one sacrificed in the name of alliance", Richard Ackland, SMH.

Michael Geist has put into words what many were thinking, in 'Vista's Fine Print Raises Red Flag'.

This explores legal, privacy and technical issues with Windows Vista validation, the new re-balancing of user rights in the End User Licence Agreement (you have less right to control your computer than you thought), and the implementation of functionality reduction (down sampling HD video resolution unless using the HDMI or similar DRM-aware video interface) at the behest of the MPAA.

The comments are interesting too, many succinctly setting out issues relevant to malware research - shows that these issues are accessible to a general audience, and that it is possible to encapsulate them simply:

"I have just read about Sony BMG and the FTC ruling that states that the action of installing DRM onto consumers machines without their knowledge is indeed illegal. It appears that Microsoft is doing exactly the same thing, but using the EULA to make it legal." 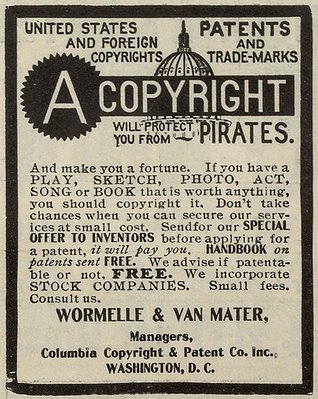 ‘Orphan works’ is a term used to describe works where the owner of the copyright cannot be located. Orphans works are problematic because works can remain unpreserved and unused- and nothing much can be done without locating the owner. The older the material- the more difficult this process is (one of the many problems with copyright term extension). The issue of how to tackle this problem has not been satisfactorily addressed in many countries- including and .

addressed the issue by allowing the Copyright Board of Canada to issue licenses on behalf of copyright owners in cases where the owner cannot be located. The Australian Copyright Council has recommended adopting a similar approach in its response to the issues paper on fair use (June 2005). However, the approach has been criticised due to the "unpredictability, delay and transactional expense inherent in the current system in that requires a ruling from the Copyright Board" (source).

In January 2006 the US Copyright Office released the result of its inquiry into "orphan work":

"Many users of copyrighted works have indicated that the risk of liability for copyright infringement, however remote, is enough to prompt them not to make use of the work. Such an outcome is not in the public interest, particularly where the copyright owner is not locatable because he no longer exists or otherwise does not care to restrain the use of his work." (p. 1, here).

The report recommends that the issue of orphans works be addressed by amending the remedies section of the Copyright Act to limit the remedies available when infringement occurs after the copyright user has conducted a 'reasonably diligent search' to locate the copyright owner and the owner could not be located (see recommended statutory language p. 127, here).

Last year the Documentary Organisation of Canada suggested following the approach recommended by the US Copyright Office.

"While the Canadian provisions may have at one time been exemplary in comparison the lack of any such provisions in most countries, the Canadian solution now appears to be outmoded and even unworkable." (p. 25, here)

Professor Lawrence Lessig recently blogged about the US Copyright Office's report. Lessig applauds the content of the report, however disagrees with its recommendations (and the Orphan Works Act 2006- the Bill proposed as a result of the report). He criticises the recommendations for ‘going too far’ as well as ‘not going far enough.’ Lessig explains that if the recommendations are adopted they would overburden copyright owners and users. Formalisation of copyright has not had to occur in the since 1976. Copyright owners may have made themselves more locatable if they knew they risked losing control of work if they did not. Immediate implementation of the changes recommended by the US Copyright Office would be unfair to copyright owners. Further, copyright users are obliged to conduct a 'reasonably diligent search.' Such an approach imposes costly obligations on the copyright user. Lessig feels that such a system would be inefficient (on top of an already inefficient copyright system) and increase lawyer involvement (therefore costs).

Lessig proposes an alternative system, which I find very impressive. He suggests that after 50 years copyright owners should be obligated to register their copyright interest. If registration does not occur then the work could either move into the public domain or the copyright owner could have curtailed rights. Such a registry would not be government run, rather there would be many registries competing with each other (keeping the cost of registration low) and such registries would have to comply with government protocols. Lessig recommends a phasing in period to give copyright owners an opportunity to register their interest.

He has prepared an excellent video about orphan works and his proposal- available here. I recommend you watch it if you have 35 minutes to spare. It is well structured and provides some valuable information (despite him saying it is an 'overly long, overly professorial explanation'). It also discussed the issue of applicability to works created outside of .

What really appeals to me is the efficiency of his proposed system of registration (especially compared with the Canadian example). The proposal also makes it much easier for people to locate the owners of older works. We need a system like this especially in light of developments such as copyright term extension. Obviously there are a few loose ends to tie up- examples include:

These are just some examples. Many can be teased out. The proposal by Professor Lessig has great potential and is something that governments should take into serious consideration.

Update: The attached picture was apparantly published in The New York Clipper, November 03, 1906- the picture appears to be in the public domain [see comments for more info]. 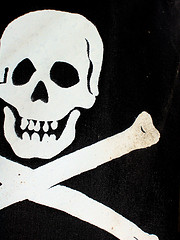 Occasionally you will come across a pirated DVD where the sound is a bit muffled, the camera is a bit shaky and the odd shadow of a person - probably requiring a popcorn refill- apppears in front of screen. Who is to blame for the shoddy camera work? Why the Canadians of course!

Read more in an article and post by Dr. Michael Geist. Geist explains why figures released by the Motion Picture Association of America and its Canadian counterparts demonstrating how Canada has become the world's leading source of movie piracy might be "more fiction that fact".