I've done my presentation at iSummit in the research track. My paper should be available soon on the site too.

In the same session, there was also a great talk by Juan Carlos De Martin about geo-location of web pages, but it was actually broader than that and included quantification issues. Read more about that here.

Tomorrow, the research track is going to talk about the future of research about the commons. Stay tuned.

Whenever a new judge is appointed to the High Court, questions always arise as to the types of decision that judge is likely to make. In a Sydney Morning Herald article on the new appointment political commentator Mark Davis notes that Justice French was one of the judges who recently struck down the World Youth Day laws passed by the NSW Parliament that made it illegal to "annoy" pilgrims at that event. However, as the article also notes, "he was also one of the judges who upheld the Howard government's move in 2001 to block refugees on the the Tampa entering Australia."

Being a keen copyright researcher, however, I was interested in the previous copyright law decisions of the new Chief Justice - and there are quite a few. Indeed, Justice French has sat on many of the significant copyright decisions of the previous decade. Justice French was one of the members of the Full Federal Court who in Kabushiki Kaisha Sony Entertainment v Stevens found that the access code in Sony Playstation games and the BootROM of the Sony Playstation constituted a technological protection measure that was circumvented by Stevens' mod chips , a decision that was subsequently overturned by the High Court. His Honour also was one of the members of the Full Court in Cooper v Universal Music Australia, where authorisation of copyright infringement via online downloading was found to occur.

To me, however, the most interesting judgment of Justice French was in Venus Adult Shops Pty Ltd v Fraserside Holdings Ltd. This was a joint judgment written by French J and another member of the Federal Court who has subsequently been appointed to the High Court, Justice Susan Kiefel. To cut a long copyright case short, in that decision the Full Federal Court considered the infringement of copyright in a number of pornographic films. As part of their decision, French and Kiefel JJ considered whether copyright could be denied to such materials based on their illegality (adult films are actually illegal in most Australian jurisdictions), or whether the remedies available to the plaintiff could be limited on the basis of their content. On the former argument, their Honours stated that (at para. 84):

There is therefore no statutory basis under existing Australian copyright law
for a finding that copyright does not subsist because the content of the
relevant work or subject matter offends against community values or standards.
That is not to say that such considerations may not inform the discretion to
award particular classes of remedy but the scope of such an exercise of
discretion would seem to be narrow.

It will be interesting to see, should a relevant case arise in the future, public policy will play any role in determining the remedies in those decisions.

I'm just about to leave my hotel room and catch a bus to the convention centre for the day's summitting, where I will later present my paper "New Methodologies for Quantifying Licence-based Commons On the Web". I'll blog more later (I promise!), but I figured I should say something, if only briefly.

For those readers who attended the event, and those who didn't but have a keen interest in copyright law, the Powerpoint presentation from David Lindsay's seminar on the Full Court decision in Nine Network Australia v IceTV is now available here.

As regular readers will know, I love a good copyright case, but to be honest with you, there's something about the way Australian courts have dealt with compilation copyright that just makes me want to bang my head on a table. That said, I thought that David's seminar was very good. It will be interesting to see whether the case goes to the High Court, given its previous rejection of the special leave to appeal Desktop Marketing v Telstra, a case with the capability to destroy the spirit of even the most passionate copyright scholar.

The Battle of the Online Peer-Produced Encyclopedias?

This just in...in an AP article in the Sydney Morning Herald, it is reported that Google is launching its very own editable online encyclopedia, titled "Knol", the term for a "unit of knowledge" (You learn something every day, don't you?) Until now, Google's Knol has only been edited by a number of invite-only participants, but this is about to change - everyone with a Google account can edit Google's Knol. I just had a quick look at Knol's main page and featured units of knowledge included conjunctivitis, feminist analytical philosophy, and safe sex. What, no page yet about The Dark Knight?

Google, being the smart world-dominating search engine that it is, has come up with a nifty business model to entice authors to contribute to Knol: if contributors "choose, [they can] have ads displayed through the Internet search leader's marketing system. The contributing author and Google will share any revenue generated from the ads, which are supposed to be related to the topic covered in the knol."

According to the report, Knol "has been widely viewed as the company's answer to Wikipedia", although reports from Google say it's supposed to "supplement" Wikipedia. And in true Wikipedia form, you can find the Wikipedia page on Google's Knol here.

Sadly yours truly was not on the original Knol invite list...Google must not know about my obssessive knowledge of colonial copyright...or The Dark Knight.

Blogging suspended due to pilgrim invasion...

To our friendly readers, blogging on the House of Commons is suspended due to the beginning of World Youth Day here in Sydney (and, more specifically, at the Randwick Racecourse next door to UNSW). Despite its moniker, WYD runs for a week, so regular blogging will commence again on Monday 21st July.

The housemates will of course be continuing our research, albeit at a different location (read: sat at home, watching Dexter marathons and consuming vast amounts of chocolate produced by companies who have previously battled it out to trademark the colour purple).

Over at the Creative Commons blog I saw that the schedule for this year's iCommons iSummit, held in Sapporo, Japan, from 29 July - 31 August has now been released. For some of the days there are still a few details to be filled in, but the speaker list is definitely impressive - Lawrence Lessig, Yochai Benkler, Joi Ito and Jimmy Wales.

Representatives from Australia include members of the Creative Commons Australia team, Delia Browne and our very own Ben Bildstein. Ben will be presenting on quantification of the digital commons, and if you've been following Ben's work about quantification here at the House of Commons, then you won't want to miss his presentation (read more about it here).

And that's enough of a shameless plug for one day...

It's always nice to start a Monday morning with a bit of Australian-related, Creative Commons-licensed fun: 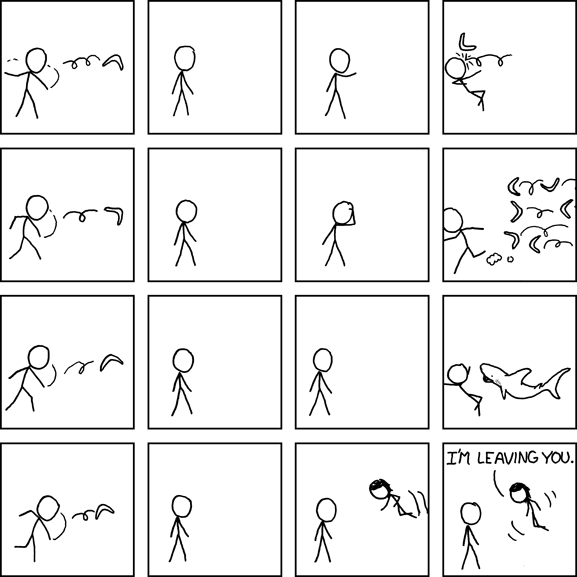 "I Am Not Good with Boomerangs", Randall Munroe - from his webcomic xkcd, available under a Creative Commons Attribution-NonCommercial 2.5 license.