A Practical Guide to GPL Compliance

The Software Freedom Law Centre has put out a guide that tells software vendors how to make sure they're complying with the GPL (see link, above). It's not hard to comply, but there are some good tips in there.

It also talks about what your options actually are in terms of basic compliance. So for example one thing I didn't know is that in GPL v3, they made it much more explicit how you can distribute source code, and that technologies such as the Web or Bit Torrents are acceptible. For example, peer-to-peer distribution of source code is acceptible as long as that is the medium being used to distribute the (built) software.

There's more good stuff in there, and even though I'm no Free Software vendor, it's an interesting read just from the perspective of an insight into how Free Sofrware compliance really works.

GPL didn't get its day in court

A few days ago, housemate Abi posted about action being taken in court over a GPL violation in the US. And I'm sure astute readers who looked at the facts thought "what? that's so obviously violation. how can they possibly think they had the right to do that?" I know that's what I thought. Of course along with that thought goes another thought: this will be another win we can chalk up on the side of the GPL and the Free Software Foundation.

Anyway, the point is, it won't be getting to court because the defendants capitulated. According to Linux Watch, Monsoon Multimedia "admitted today that it had violated the GPLv2 (GNU General Public License version 2), and said it will release its modified BusyBox code in full compliance with the license."

This shows that the system works. The GPL must be clear enough that it is obvious what you can't do. (Okay, there's still some discussion, but on the day to day stuff, everything is going just fine).

The Software Freedom Law Centre (SFLC) has filed a copyright infringement suit against Monsoon Multimedia Inc in the first such lawsuit in the U.S. based on violation of the GNU General Public License (GPL). The Software Freedom Law Centre has claimed that Monsoon Multimedia failed to provide downstream recipients with the source code of the free software application Busybox, when distributing firmware which included Busybox, as required under the GPL.

More information is available here on the SFLC website and here on Arstechnica.

The Samba team have announced they will start using the new version of the GPL, after initially indicating they might not. As I recall Andrew Tridgell saying, they were using GPL version 2 (the previous version) because they liked the words of the licence, and the principles of free software as embodied in it, and GPLv3 seemed to be going in a slightly different direction.

This announcement acknowledges that GPLv3 "is an improved version of the license to better suit the needs of Free Software in the 21st Century," saying "We feel this is an important change to help promote the interests of Samba and other Free Software."

Unfortunately, the announcement doesn't say much about how Samba made their decision or what swayed them.

GPLv3 has been Released

Linus on freedom and GPLv3

This e-mail from Linus Torvalds was really interesting to read. Linus likes GPLv2 for GPLv2, not for the FSF foundation that it's built on. And that's a hard viewpoint to argue with, because FSF pushes GPL not only based on its freedoms, but also on its GPL-compatibility (after all, how could you make the Linux kernel so successful without making it GPL?), and also its technical correctness (with GPL, like no other free software license, you know what you're getting, and that it works).

Selected quote:
"You're acting like some Alice-in-Wonderland character, saying that your definition of words is the only one that matter. And that others are "confused". Read up on your humpty-dumpty some day."

(Post script: See this piece on linux.com, with some views from Stallman, Torvalds and Novell
-- Ben.)

Last week we posted about Second Life releasing its viewer application under the GNU GPL (see that post here). Andres Guadamuz at TechnoLlama has done a fantastic analysis of what this actually means and comes to the conclusion that the FLOSS exception that Linden Labs included as part of the release may in fact make "the software incompatible with other GPL software." Read it here and keep an eye on the comments section as well.

The online virtual world Second Life has been in the news quite a bit recently. Earlier this week it hit the headlines when land owner Anshe Chung requested that YouTube take down a clip of an interview she conducted within Second Life, where a number of other in-world avatars harassed Chung using some...uh...interesting tactics. Read more at CNet news here and Peter Black has picked it up here too with an Australian perspective.

Now Linden Lab, the company behind Second Life, has announced that it will release the code of Second Life's "viewer application to the open source software development community." (See the press release here .) The code will be available under the GNU GPL v2 (interesting that they chose not to wait until version 3 is out?) See Lessig's blog here, the Sydney Morning Herald here and then find the actual source code here, plus information about the licensing here. Interestingly, they have also included an additional FLOSS exception - see it here.

This is a big step for the company who seems to be one of the more user-friendly gaming companies when it comes to intellectual property issues. Second Life also seems to be a common international meeting place - Creative Commons had one of its many birthday parties in there and Judge Richard Posner gave a seminar there late last year.

So this is one small step for an avatar, one giant leap for the open source community.

GPLv3 and Australia Symposium in Computerworld

Rodney Gedda has posted a piece about our GPLv3 and Australia symposum online at Computerworld. Rodney has been popping up regularly at free and open source software events here at the University of New South Wales over the last few months - he gave an excellent talk at Software Freedom Day back in September. See Rodney's article here. 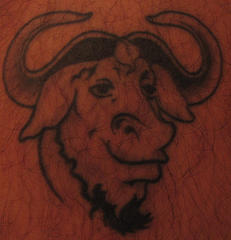 After reading some of the commentary out there about GPLv3 you could be forgiven for thinking that the impending release of the new GPL will lead to the destruction of all that is good in the land of programming. With GPLv2 supporters like Linus Torvalds declining to adopt GPLv3 it is hardly surprising that the world (or at least the FLOSS world) is so divided.

So will planes fall from the sky when GPLv3 is released and all software licensed ‘version 2 or later’ finally ticks over into GPLv3 mode? Is GPLv3 part of Richard Stallman's plan to launch a “dictatorship of the programmers”? This housemate thinks not. I was thrust into the world of GPLv3 as part of research for an upcoming symposium (see details below) and it became clear that GPLv3 is the subject of heated debate.

There are a few GPL ‘hot issues’ and DRM is one of the more burning of said issues (if you don’t believe me just look at how red it is on the GPL comments page). What is all the fuss about? The general idea is that DRM is being used to ‘evade’ rights/‘freedoms’ provided under the GPL and this practice is not acceptable. The FSF is sending the message that technical evasion of the GPL is not ok. The message is loud and clear but some have queried if such an endeavour is desirable or even possible. The thing is, not all DRM is necessarily bad (consider the use of DRM for medical equipment or security purposes). Some Kernal developers have questioned if a software license is a sensible place to put all these anti-DRM provisions and suggest that these provisions are included for the service of political ends.

What do I think? I understand that the FSF is concerned about protecting the core freedoms in the GPL however I not sure if protection should be at any cost. It is important to bear in mind that inserting Anti-DRM provisions to protect particular freedoms will always be at the cost of other freedoms. That being said I disagree with people who suggest that GPLv3 “has the potential to inflict massive collateral damage upon our entire ecosystem and jeopardise the very utility and survival of Open Source.”

Final judgment will have to be reserved until draft 3 is released. In the meantime go to the FSF website, read the current draft and make your comments.

Don’t forget to register to attend GPLv3 and , a symposium that looks at GPLv3 issues from a uniquely Australian perspective. We have contributions from Andrew Tridgell and Eben Moglen as well as an excellent panel of expert commentators. More information is available at http://www.cyberlawcentre.org/2006/gpl/.